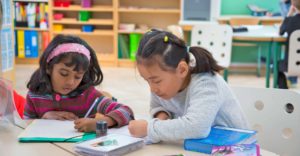 Our school operates bilingually and
internationally, and promotes individuality.
It is home to around 20 nationalities.

Two stages instead of four grades

Why the mix of ages?Instead of being divided into four grades, the ibms is divided into a reception stage (ages 5 – 7) and a primary stage (ages 7 – 10). Why? According to the Montessori principle, mixed-age groups learn very efficiently in all spheres of life. This includes classic learning materials based on the curriculum, but also the development of independence and self-confidence, social interactions, and responsibility for one and the environment.

At our school we are committed to working consistently in a bilingual setting. Children learn both languages – German and English – by the tried-and-tested immersion method, sometimes likened  to a “language bath”. Both languages are given equal status and offered at the same time. In school time this means:

The extent to which this knowledge is anchored in the second language can be ascertained by asking questions on the content, in the language in question, shortly after learning, or by tests or other methods.